NEW logo for Bite The Dust! 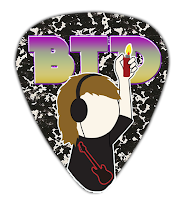 After kicking around ideas and doodling in my composition journal for at least a year, I have found a logo that I have conceptualized, designed and like. Bite-the-dust.com has been around for 10+ years and I ever came with up an official logo. After a LOT of thought and bouncing ideas off of everyday I finally came up with something.


* This logo was pretty good, but the problem is it has other people's images in it. So I knew there would understandably be trademark issues.

I created a simple, gender-ambiguous character in a rock and roll shirt with head phones, using the bic lighter to symbolize carrying the torch. BTD kid changes outfits, I made alternate ones of them in glam, punk, and more. I put the bass guitar on the t-shirt as a nod to the killer bass in the Queen song "Another one bites the dust." On September 23rd 2013, the BTD Logo was officially trademarked. I will still use the rock star faces I illustrated sometimes, but this is the official logo for Bite The Dust.

The album art of Tommy by Mike McInnerney

September 12, 2012
People often ask me what my favorite album is. Without much thought I am able to answer them. The Who's 1969 album "Tommy" is my favorite record of all time. The album artwork also happens to be my favorite. Recently I was thinking about the album and how it affected me in my life. I decided to look up the Tommy album art and was surprised that I was unable to find any of it. I could find the cover, but never all the album art inside. The Tommy CD comes with a booklet with lyrics and a series of different illustrations. But they weren't on the internet.   So this blog will be changing that! I just took out my CD booklet and scanned all the artwork. There are two versions of the cover, one featuring small images of their faces inserted into the gaps in the central sphere. The other is just the original work. Executives at The Who's record label insisted on having the band members pictured on the cover, so that's why there are two covers. Pete Townshend c
1 comment
Read more