The Next Day, A Year Later

Just about a year ago we were gifted the best gift a music fan can get...new material.

I gobbled up every album teaser Bowie had to offer since announcing the new album on his birthday in January. Like a true boss, he announced a new album was coming in March right on the coat tails of his long rumored retirement. It was once again an exciting time to be a David Bowie fan.

March 8th came like Christmas morning, and I marched to the music store as if it were my sworn duty to report. It was on repeat for the next oh...month at least. I warned my friends and house guests before they came in "I'm listening to Bowie's new album a ton so yeah...just a heads up." Thankfully my friends know me and this wasn't even an issue. I guess I just like to prepare people. But my house my rules, blah blah blah.

Normally I pop out album or song reviews in less than a month, but this album literally took me a solid year to digest. Not only did we get a new album, but a music video to accompany just about every song. The first song and video to come out was "Where are we now?" and it left quite a few people confused. I think fans/the public might have been expecting something more "rock". It was certainly artistic, and in David Lynchian fashion left the viewers befuddled. That's what I love about Bowie though, and I also know that his music is diverse and I excepted his new album to be. Info was leaking about the album that the rest was "more rock." I wont lie, I was looking forward to that the most. 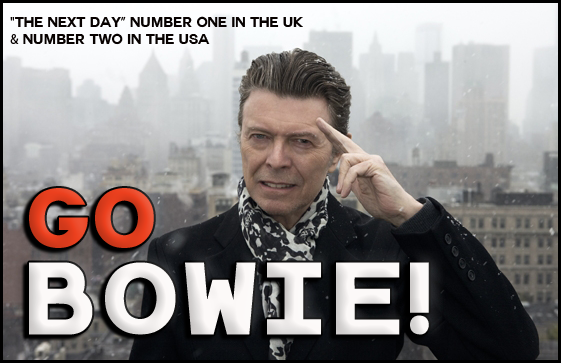 When word of The Next Day came out I happened to be in a really trying point in my life. A new David Bowie album was the exact kind of thing to give me excitement, and even in a way something to hang on for. The album came out and did well, which I was sure to remind people I knew relatively often. The next buzz on Bowie street was that he might tour. Just a year earlier things on the tour front were looking bleak, now it's shaping up to be a real possibility.

The album begins with the rockin' song 1) "The Next Day." Every music video he's done for this album has been artistic and provocative, this one possibly the most. The music video features call girls and clergy men. They flirt with each other and bleed while Bowie rocks out on a stage with a spot light and a pointed finger. The video ends with Bowie getting flogged and standing like a deity under a bright light saying "Thank you everyone."
>>>Listen to the song here.


2) "Dirty Boys" Although I will admit right now the whole album is pretty tight, this might be my favorite song. The lyrics are like a new "Rebel Rebel."
>>>Listen to the song here.

3) "The Stars (Are Out Tonight)" Another great song with a video featuring gorgeous and androgynous Tilda Swinton and an gender bending younger Bowie type. Makes me think of the music videos "Little Wonder" mixed with "Thursday's Child."
>>>Listen to the song here.

4) "Love Is Lost" This might be the most electronic song on the album. It was already been remixed many times and given many artsy videos---which I enjoy. It's a blend of electronic, and a keyboard that sounds like a pip organ.
>>>Listen to the song here.

5) "Where Are We Now?" This was the first song to come out, which happened to be January 8, Bowie's birthday. The music video also came with it, which was a pretty perplexing one. Mostly it was the fact that the lyrics didn't make any sense. Thankfully the lyrics are shown in the music video, but they don't make it much clearer. It almost seemed like he just made up words or slightly changed existing ones. But upon a bit of research, he is describing the names of actual places.
>>>Listen to the song here.

7) "If You Can See Me" This song sure begins intensely with strong vocals. I've heard quite a few people describe this song as "Like being smacked in the face with an explosion of sound."
>>>Listen to the song here.

8) "I'd Rather Be High" This is another song on the album that has been remixed a lot. I still prefer the original, and it's become my anthem on a tough work day. This song was also used for a Louis Vuitton music video featuring David Bowie. The model in the video is probably supposed to look enchanted by something, but really she just looks distracted...and not by the fact that she's sitting next to David Bowie.
>>>Listen to the song here.

9) "Boss of Me" A really jazzy song with some of the best lyrics that I can't help but think are written for Iman.
>>>Listen to the song here.

10) "Dancing Out in Space" Dancing everywhere in space like it's your religion? Sounds cool!
>>>Listen to the song here.

11) "How Does the Grass Grow?"  In my opinion, this song is the biggest ear worm. There's a lot of good material here but this is always the one that gets stuck in my head.
>>>Listen to the song here.

12) "(You Will) Set the World on Fire" Starts with hard and rocking guitar. Defintely a sound that takes you back to Ziggy, another ear worm.
>>>Listen to the song here.

13) "You Feel So Lonely You Could Die" Bowie turns things down to calm and melancholy with this song. This would be the one where people would break out their lighters (or smart phones...). Song ends with the same drum beat as "Five Years."
>>>Listen to the song here.

14) "Heat" Things get turned down a bit lower with this grim song that describes a person who is lost and defeated.
>>>Listen to the song here.

15) "So She" A melancholy song that reminds me of "The Rays" from the album "Heathen."
>>>Listen to the song here.

16) "Plan" Begins with hard guitar and a force drum beat, almost like it's submerging you into this other place. I really like this instrumental track.
>>>Listen to the song here.

17) "I'll Take You There" A fun and even sassy song that also makes me think of Ziggy. It turns into a great anthem that gets your fists pumping.
>>>Listen to the song here.

All in all, I would give this album a 4 out of 5.
Is it worth buying? Yes!
Should you go out of your way to listen to it: Yes, it's worth it.
Would I recommend it? Yes!
Sure I have songs I prefer, but I think the whole album is worth it and solid.